This is the second pull of the seine to rid the eastern half of the pond of algae before we could seine for muskies. The western half was pulled prior to this. At the end of this video, we were drawing in the lengths of seine net to slowly reduce the area the muskies were in. Unfortunately, the media card was full at this point so we do not have footage where we then scoop the muskies into 5 gallon pails to carry them up the pond wall to the awaiting WI DNR transport tank/truck.

This is the first pull with the seine which ended up being the first of two passes to remove the algae before a pass with the seine net for capturing muskies into buckets and then transport tank. This is roughly a 66 minute recording sped up 1000% reducing it to just over 6 minutes in viewing length.

Here’s an additional look at the muskie stocking in Pewaukee Lake of the Amron pond reared muskies as part of the research with the WDNR and University of Wisconsin Stevens Point. Tom Koepp provided iPhone video from topside which has been merged into earlier published footage from the GoPro. One hundred twenty one muskies of two hundred were recovered and stocked into the lake, and only one didn’t retain its PIT tag.

Mary Pokora was kind enough to take pictures while we worked on the pond.  The chara algae resulted in a few pulls with the seine just to try to clear it to make way to seine the muskies: first pull was of the west half, then the eastern half, and finally one full perimeter for the remaining muskies. 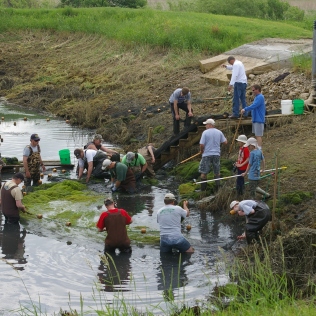 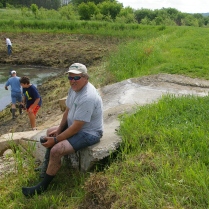 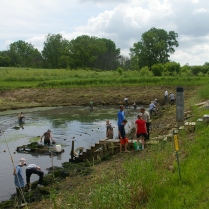 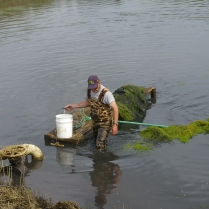 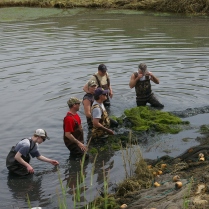 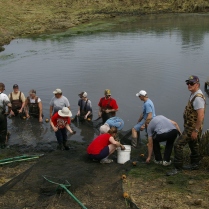 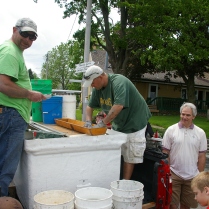 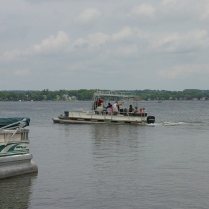 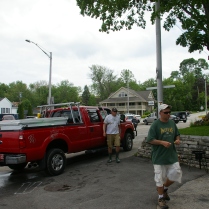 Nancy Hinkforth provided these images from the pontoon release trip she was on.

With so much media gathered from the muskie rearing effort June 1st, 2013, here’s a portion in reverse order……their freedom!

Greg Sieren and Mike Phelps have been visiting the pond over the last couple weeks.

Greg reported on May 18th that a few grass snakes had made the pond home, the minnows were in good numbers along the shoreline, and muskies weren’t visible.

Mike didn’t notice snakes on May 19th, but the minnows were scattered and there was one muskie spotted along the shoreline that wanted nothing to do with the GoPro camera as it was gone in a split second while trying to put the camera into the water.

Mike took a few pieces of equipment down to the pond May 25th to help clear the way for muskie collection. Focused on the clean-up, all that was spotted were minnows around the pond perimeter and a snake on the west side of the spillway. Temperatures remained cool in comparison to recent years. The water exchange through the pond sounds similar to weeks past as well.

After the Quad County event Sunday May 5th, a trip to the pond with the newly acquired GoPro Hero 3 Black got some use. The pond was dyed to reduce algae so the water is not as clear as it has been. I’m not sure what turtle species this is. Leave a comment if you know or have a guess. Just comparing it to the common musk turtle and common snapping turtle, I’d guess it’s a snapping turtle.

Ice out in South Dakota, snow in Minnesota, and all the rain here and between has been a challenge to ringing in spring. Robinson Wholesale found a window to bring us minnows and a vehicle better suited to potentially soggy ground conditions Wednesday before the next front brought us yet more rain. Here’s a look at the minnow delivery process, current pond conditions, and the nearby Fox River:

Here we’re checking on the minnow population and activity because we have 100 pellet fed muskies and 100 pellet fed minnow finished muskies in the pond from a fall transfer from the Wisconsin Wild Rose hatchery system. The weather hasn’t enabled us to truck more minnows in hopes of preventing the muskies from eating each other as well as hoping they’ll eat up and grow larger before collection and transport currently scheduled for June 1st, 2013. Hopefully the snow in Minnesota today and ice out in South Dakota issues means a chance of delivery this upcoming week.