The Chapter’s June Member’s Outing was hosted out on Okauchee Lake (June 21st). The weather may have not been the most conducive for catching muskies (fish were seen, not boated), but it was just gorgeous enough for those involved to meet up afterwards for food and drink at Foolery’s–a bar & grill on the Okauchee channel. I’m positive that everyone there can testify when I say that it was a fantastic time. In moments like these, seeing everybody enjoy themselves hanging out and talking with all of their fishing buddies is priceless; it is a reminder of why we have clubs such as are own. That’s why Brian Mirek deserves huge props for putting on these events this year. He knows the importance of having these outings, and he took it upon himself to ensure that our Chapter would once again have them. Make sure that you attend these events if you can! They are such a blast, and a they are great way to become acquainted with others in the club.

The first Member Outing for our chapter took place on Pewaukee Lake on Tuesday, May 17th. Fishing from 4 p.m. to 9 p.m. in the evening, 21 people attended. Two fish were caught (Brian Mirek with a 35.5” and Bob Petzke with a 37”) during the outing. Those who were able to stick around met up at Curly’s Waterfront Bar & Grill to talk fishing. Everybody had a great time, and if you have been unable to attend any of the other Member Outings thus far, you should really make an effort to do so! These outings take place every month (dates listed below), and are a great way to become acquainted with other people in the Chapter.

On our Friday September 20th outing, Mother Nature dealt an early kick off to fall with it being a bit windy and a little chilly!!!! Trolling seemed to be the ticket as Lynne Dembiec took the Big Fish pot with a 36.75 incher. She also boated 2 other 35″ers. Steve Berg stuck a 34″ along with a pike casting. Afterwards, a good time was had at Smokey’s Muskie Shop. Thanks to Rick for keeping the shop open for us. Geoff and Jen Verges supplied the meal which was some awesome pulled pork!!  These outings are all about having fun, chasing Muskies and the camaraderie on and off the water.

In the future, if anyone is looking to host an event, pick a date and let the crew know. As President Craig Ader said “I am truly impressed with the cooks we have. If you have not attended one of these outings, you are missing out on a treat in so many ways.”

Even though the water temps are behaving, we will be canceling tomorrow’s outing due to no one chairing the event. We hope to have better news for the September 20th outing.

Due to the hotter temperatures recently, the lake surface temperatures have gotten well into eighties. We’re canceling the member outing this Saturday as a result.

This past summer on the water outings were scheduled for the 20th of each month on Pewaukee Lake followed with socializing at Smokey’s Muskie Shop.

June saw about 9 members participate with Greg Irwin chairing the event.   Rick Wyrwas won the big fish pool with his 37 incher caught during the outing.  He stuck a 38” fish earlier in the day before the outing.  There were reports of seeing quite a few fish, but nothing else being caught.

Tim Blazek, Tom Blazek, Steve Berg, Nick Toole, and Mike Phelps made it out Monday night despite the threat forecast that day. The storm held off until later that evening.

Bass have been active but the muskies were mostly following. Tim and Tom watched a muskie they moved get plucked as a boat worked behind them. Cranks and blades moved fish and the west end revealed more than the east.

The “Big Fish” competition that we started at the outings this year ended in a tie this month since Andy Rosenau and Rick Wyrwas both caught a 41″ fish.

Half of the money collected from the participants is awarded to the person catching the biggest fish that night while the other half is set aside for a prize drawing at the end of the year. Anyone that participated in the fishing contest throughout the year was entered in the drawing. Winners of the year end drawing were Steve Berg, who won a Slammer bump board, and Roy Hinkforth, who won an 8 foot Okuma fishing rod. Congratulations!

Thanks to everyone for coming out and making the outings so much fun. We hope to see more of you join us next year!

On July 20th we hosted our third chapter outing of the year. 14 members and 2 guests attended the event. Five minutes into the outing, at 4:05PM, Rick Wyrwas caught a 39 inch muskie casting a topwater bait. Roy Hinkforth caught the only other muskie of the night, 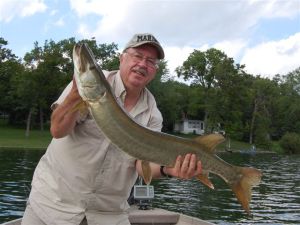 a 36 ½ inch musky, while trolling a crankbait. Congratulations Rick on wining the “Big Fish” contest two months in a row!

Although there were only two fish caught during the outing, there were more stories to be shared at the gathering afterwards. Two members lost not only fish, but their lures and leaders as well. The biggest loss of the night was an entire rod and reel combo along with the trolling rod holder which was ripped right off the boat. Wow – that must have been one hungry fish. Fortunately, the rig was recovered the following day and returned to the owner.

Thanks to everyone for coming out and making the outing so much fun. We hope to see more of you join us next month on August 20th!

On June 23rd we hosted our second chapter outing of the year. The threat of severe thunderstorms didn’t discourage the 11 members and 2 guests that participated. Although the weather held out during fishing hours, the muskies were not very active. Rick Wyrwas caught the only legal muskie of the outing. He boated a 36 incher casting a bucktail. Not only did he win the cash prize for the “Big Fish” contest for the outing, but it was a doubler, due to the fact that nobody caught a fish during our first outing. Congrats again Rick!

The gathering afterwards brought us all together for some good food and drinks while we tried to dodge the raindrops. Thanks to our hosts John and Gordy, we appreciate them allowing us to continue to have our gatherings at Smokey’s West.

Thanks to everyone for coming out and making the outing so much fun. We hope to see more of you join us next month on July 20th!